When we read Bible stories to our children, there are common stories that are never forgotten. It it is, after all, very important that they learn that Adam and Eve sinned (it’s the reason for Jesus) or that Moses lead the Israelites in the desert. But in my opinion, the most important Bible story that’s most often left out is the story of Jeroboam and Rehoboam. 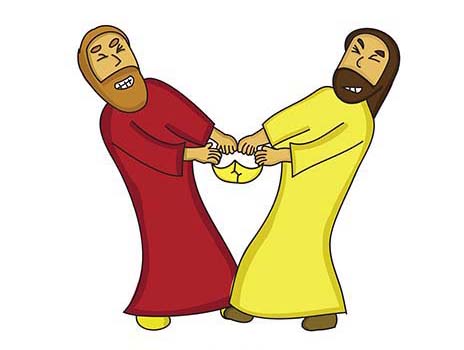 Rehoboam was the grandson of the great King David. David’s kingdom was the largest and most powerful in all of the Old Testament and when Rehoboam’s time came, he took over as king of that kingdom.

But Rehoboam was bent on being a fierce leader, and ignored the council of the older men who advised him to be civil with the people. Instead, he listened to the advice of the people he had grown up with and tried to demonstrate his might as king by showing no mercy and taxing the people heavily.

Over time there would be conflicts and wars with people of other nations and eventually the people of the Kingdom of Israel were defeated and taken away into Exile. While the Kingdom of Judah was also later taken away, they were able to maintain their identity and eventually returned from Exile. When it was all said and done, Judah was all that was left of the original twelve tribes of Israel. And by Jesus’s time, they became known as the Jews.

This fulfills what’s said in the Old Testament. Referring to the Exile, Isaiah says “…the LORD will extend his hand yet a second time to recover the remnant which is left of his people” (Isaiah 11:11). And before that in Genesis, God says to Abraham “all peoples on earth will be blessed through you.” (Genesis 12:3) One way that Jesus makes both of these come true is by inviting all people into the kingdom of God.

Growing up, I never really understood why it was the Israelites in the Old Testament and the Jews in the New. And I didn’t get that when Jesus preached to all people it was tied into the stories of the Old Testament.

In our Advent book, Bible Characters for Advent, we were sure to include the story of Jeroboam and Rehoboam. But we told it in just 11 sentences and in a way a kid will understand. We believe that if you tell it right, kids really can understand the story of the Bible. Hope you do too.