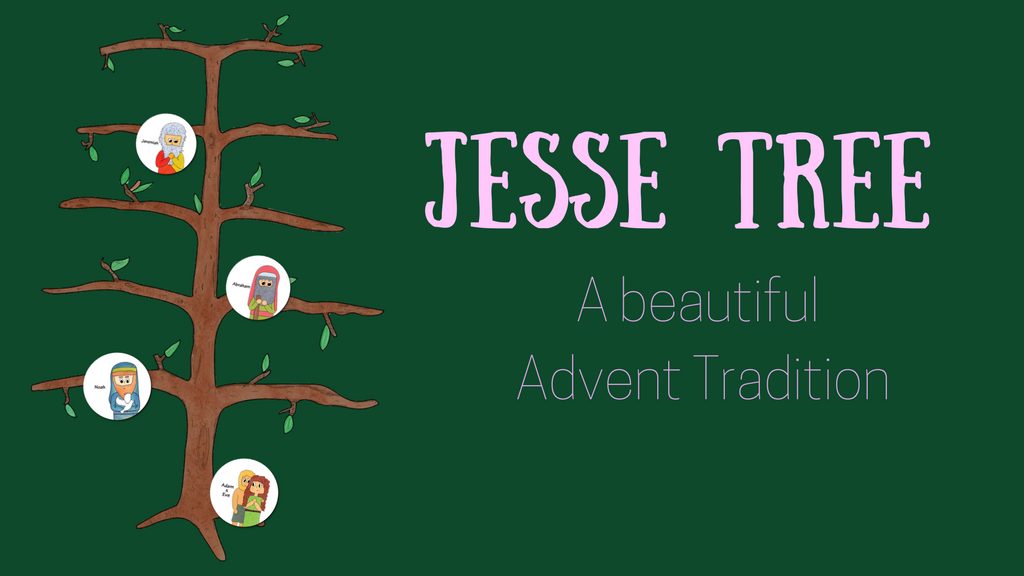 Jesse Tree: What’s in a Name?

The Jesse Tree is an old Advent tradition and one that has its roots (pun intended) in scripture and tradition.  The Jesse Tree is named after Jesse, the father of David, the great, Jewish king from the Old Testament.

There was an ancient, but well-known Jewish prophesy that is found in the book of Isaiah, chapter 11, verses 1-2:

“But a shoot shall sprout from the stump of Jesse, and from his roots a bud shall blossom.”

We are most likely all familiar with this passage, but it might be a little hard to understand why Jesse is being compared to a stump.

There is a footnote in the New American Bible that explains how after the reign of King David and after the Babylonian exile, only a remnant of the line of Jesse remained.  It was from this remnant that Jesus came, from the house of David – “a shoot…from the stump of Jesse.”

Shoots or sprouts are signs of new life and hope.  Jesus, as the descendant of David, and of Jesse, represents the new sprout – the new hope – the source of salvation.

What is a Jesse Tree?

The concept of a Jesse Tree is similar to that of a family tree.  It traces the story of salvation from creation until the Birth of Christ.  The Jesse Tree originated in the medieval period.  Originally, the focus was placed solely on the people involved.  More recent versions focus on prophecies, events, and people leading up until the time of Christ.  In a sense, it is a way for us to join the ancestors of Jesus in waiting and expectation of His coming.

The Jesse Tree and Advent

Advent is a time of expectation and preparation.  It is a time to remember not only the first coming of Jesus in the little town of Bethlehem, but also to look forward to His second coming.  The season of Advent allows us to prepare our hearts in a special way for Christmas – the Birth of Christ – the Birth of our salvation!  A man by the name of Henri Nouwen said,

“Waiting is a period of learning.  The longer we wait, the more we learn about Him for whom we are waiting for.”

There is no better way to prepare room for Jesus in our hearts than by closely praying with and focusing on the great events leading up to our salvation.  Looking at the whole Old Testament with its 46 books can be a little overwhelming to say the least.  The Jesse Tree helps to break it down into bite-size pieces perfect for children, families, and all individuals.  The Jesse Tree can also serve as a kind of Advent Calendar. This year we  are especially excited about our new magnetic Jesse Tree!

The first Jesse Trees appeared in art most likely during the medieval times.  They began as tapestries, carvings, and stained glass windows in churches so that people who were illiterate could still have a chance to “read” the Bible and learn about the events leading up to the Birth of Christ.

The Jesse Tree designs showed Jesus’ connection with Jesse and other important Biblical figures.  A tree grew out of Jesse and on its branches were pictures of other ancestors of Jesus.  The tree would then culminate with the figures of Jesus and Mary.  The Cathedral of Chartres, in France, dating back to 1260, has a particularly famous and beautiful Jesse Tree stained glass window.

Why Use a Jesse Tree?

Advent is a time of joyful expectation.  Using a Jesse Tree can help place the focus on the amazing faithfulness of God, our Father and Savior.  The Jesse Tree encompasses over 4,000 years of history.  The true faithfulness and love of God are seen in that rich history.  He has kept the promise He made to Abraham and to every generation since then – to be present and faithful.  God is here with us still and He always will be.

In the words of the “O Antiphon” for December 19:

“O Root of Jesse’s stem, sign of God’s love for all his people: come to save us without delay!”